It was determined acupuncture and electroacupuncture are viable solutions for the treatment of urinary incontinence. And they also determined none of the participants in the study needed the assistance of pharmaceuticals or surgical procedures to achieve these results. 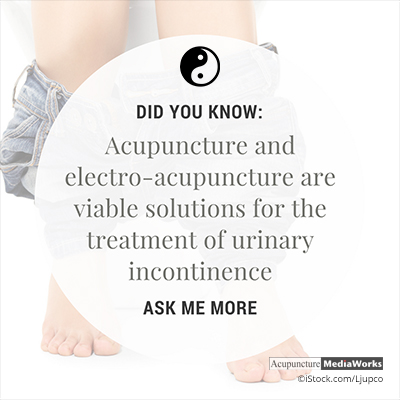 According to the World Health Organization, urinary bladder control problems affect nearly 200 million people worldwide. Women tend to be more likely to be affected by urinary bladder dysfunction than men. The most recent reports show more than 50 percent of older Americans struggle with urinary incontinence. This is just one of the many urinary problems that plague people all around the world. Urinary bladder dysfunction can mean anything from enuresis (urinary incontinence) to bladder stones. Many of these illnesses are preventable or treatable.

The urinary bladder is part of the filtration system in the human body. The bladder stores and excretes urine from the kidneys and really only has this one function as an organ. However, in Traditional Chinese Medicine the bladder is viewed somewhat differently. As an energy system, the bladder is very closely related to the functions of the autonomic nervous system. The bladder energetic meridian runs along both sides of the spine from head to heel. The autonomic nervous system is responsible for the control of the unconscious bodily functions, such as breathing and digestion.

Acupuncture, part of the nearly 3,000 year old medical system of TCM, has been shown in numerous studies to be effective at treating Incontinence

Acupuncture elicits an autonomic response that applies a modulation effect on the nerves that control bladder function. Acupuncture has also been shown to positively influence the immune system, as well as the psychological well-being of the patient. This benefits the individual who might be suffering from urinary bladder issues.

The general premise of TCM and acupuncture is that when the energies of the meridian are not flowing properly, then something is out of balance. This can manifest as either an excess or a deficiency. Regardless of excess or deficiency, the energy has to be balanced for it to flow properly and allow the organ to function as it should. The acupuncture needles modify the flow of energy, creating balance and harmony. There are over 400 acupuncture points on the body and 67 of those exist on the bladder energetic meridian alone. This makes it one of the most commonly used meridians in TCM and it is used to help treat various different conditions.

This article was posted in . Bookmark the permalink. Follow comments with the RSS feed for this post. Both comments and trackbacks are closed.
(727) 266-3000 Directions Contact/Schedule